Deer Path Park is well liked by most cross country fans as it features a true cross country course.  There are some hills, but nothing like the Bowl at Holmdel Park, and the surface, while not as groomed as that at Holmdel is level with no roots or rocks to trip up an unwary runner.  If it has rained there may be some wet spots with a little mud but easy to get through.


For the 5 kilometer race the course is a double loop, which makes it a good spectator course, something that cannot be said of many cross country courses.  The 8 kilometer also features multiple loops but with a more intricate layout than the 5K. 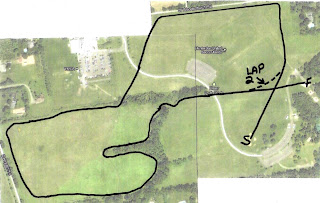 
Team competition is the emphasis for cross country racing and many a road runner has had his or her arm twisted by a team captain who needs to fill out a racing team.  In cross country the open women’s teams must have five runners, rather than the four that is currently needed for road races.  Open men and masters 40 and 50 teams also require five members to score.  All masters women and masters 60 and 70 teams require only three.


Of the local teams the Sneaker Factory has the most teams in top positions in the team grand prix.  That club is leading the open men division and is tied for first with Raritan Valley in the M40 division.  Their W50 team is leading their division.

Because road racers need a little enticing to coax them off the roads and onto the dirt and grass there are incentives in the team grand prix.  All teams receive a two point bonus, even those teams that finish below the usual scoring place.  For instance a team that finishes ninth will still garner two points for completing the race.

There is another enticement for individuals in the New Balance Grand Prix.  The floor is raised from 200 that is in place for road championships to 300 for the two cross country championships.  One hundred is the floor for non championship races that have a top score of 500 points.


The national USATF cross country committee now offers a very valuable incentive to the top open teams in the 8 kilometer race.  Each winning team, male and female will be awarded a $500.00 travel stipend to the national club cross country championship in December in Seattle WA.  Last year the Raritan Valley Road Runners men’s team was able to go to the meet that was held in Charlotte NC.


Three clubs sent masters teams to the Syracuse Festival of Races 5K last Sunday.  This is the fourth year that the race has been the masters championship and the fields keep getting stronger each year.

The Raritan Valley Road Runners finished in fourth place in the M60 team division with the Shore Athletic Club fifth.  The Shore club won the M70 division, lead in by Ralph Garfield, 76, of Manalapan who placed third in his division.  Jim Leitz of Bayonne placed fourth in the M70 division to lead in his Clifton Road Runners that placed second to the Shore team.


Next up for the Masters nationally is the 5K cross country championship that will be run on October 23rd in Fairport NY, near Rochester.  That is in conflict with the 5K cross country race here in New Jersey so teams will have to dig down to put teams at two different venues on that day.


Both the Clifton M70 team and the Raritan Valley M60 team are in contention in the new national masters team grand prix.  They will have met the three race in the series requirement but still need to get to the cross country race this month and the one in Seattle in December to maximize their points. [edit: National Masters 5K XC Results here]
Posted by Thinnmann at 11:25 PM